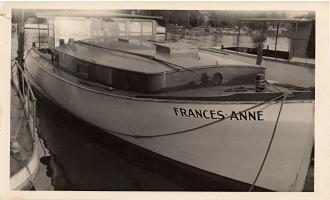 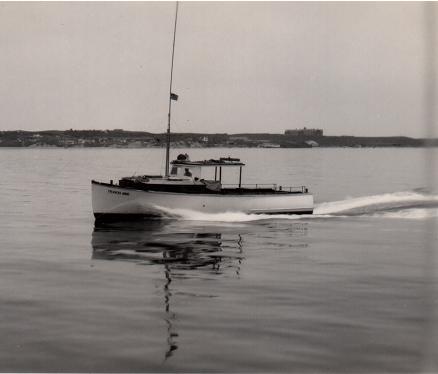 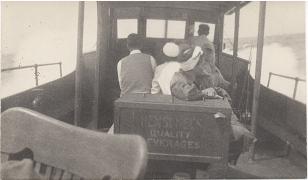 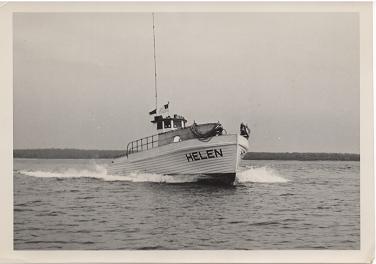 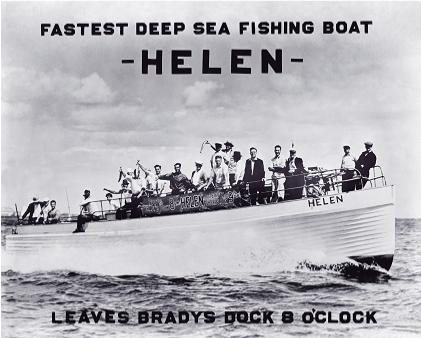 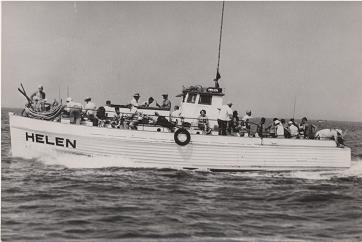 Frances Anne, a 38' Matthews, as she was when Capt. George Glas purchased her.

Showing a good turn of speed, Frances Anne is pictured off Culloden Pt., entrance to Fort Pond Bay, Montauk, NY. Montauk Manor can be seen in the background. Circa 1946. Boat was powered by a single Kermath gasoline engine.

Photo from the stern of Frances Anne while underway in what appears to be some snotty weather.

Frances Anne was Capt. George Glas's first personally owned business boat. He was involved in the industry with a friend before WW II broke out. He served in the U.S. Coast Guard during the war as a Chief Motor Machinest Mate and in 1946 started his own party fishing business.
He kept Frances Anne for a couple of years. Realizing she was too small for the trade, he purchased Helen, a 47' Wheeler built converted Rum Runner. Frances Anne was sold to a new comer to the business who kept her for several years before he aquired a larger boat and she was again sold. Next owner was one of Montauk's best known sport fishermen at the time. The boat remained in Montauk under the same name until the early 1970's but with a flying bridge added as well as a power change to diesel.

A 1933 poster for Helen showes her in a transitional state between rum runner configuration and party boat. Notice the wheel house is still far forword and only high enough to see over the bow. Safety rails and a cockpit aft are the only changes at this point. It is doubtful that the original pair of 500 hp Liberty gas engines were in her at the time of the photo.

Two views of Helen in yet another configuration. This is what she looked like when Capt. George bought her. Notice that the wheel house is no longer on the bow but now sits atop the engine room raised trunk. There was a drop down into the wheel house so that the deck was at the same level as the foredeck. The only "out of the weather" shelter for passengers was below decks in a trunk cabin. Access was through a small "dog house" forward of the wheel house. The head was in that cabin along with very little space.
The boat was powered by a pair of Chysler Royal gasoline engines (straight eight flat heads) that might have developed 150 hp each on a good day. She could still get up a trot with that small amount of power so one can only imagine how she went with the original engines! 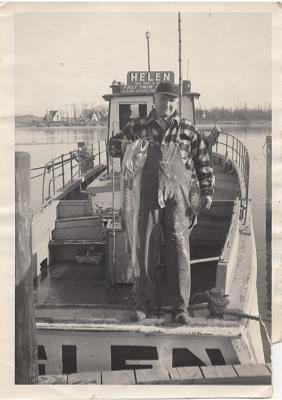 Helen backed into a slip at Tumas Dock, Lake Montauk circa 1952 after a winter Cod trip. Yup, we've been doing that for a bit!. Notice the lack of development in the background. That's Star Island. No Coast Guard Station, no big marina and the sand bar is still in the center of the harbor.

Helen begins to change with the demands of a fishing public looking for a little more comfort than was offered in the past. Notice the entire superstructure is different. There is now a small shelter behind the wheelhouse so that folks can get out of the weather without having to go below. The lower cabin is still there. Color of the hull was changed to black, then went blue and finally to our now trademark red.
There has also been a change in power. Capt. George, using the skills he learned from the military in WW II, collected enough parts and pieces to build two Hercules DWXDS diesels. They were "super charged and after cooled" and turned out a whopping 150 HP. What they really did was cut the fuel bills to something bearable and the worry of having the boat blow up like a bomb was gone! Even in those days gasoline engines were not efficient and the gasoline was way more expensive than diesel. Now, diesels are still more efficient but the cost of the fuel is  higher than gasoline. 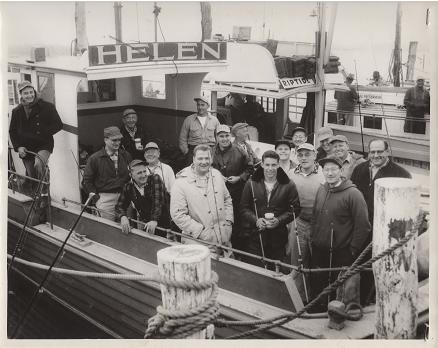 A Spring morning in 1958. Helen prepares to sail on one of her final trips before she is replaced with the brand new custom built steel Helen II. Of interest in this photo are the two boats to the right of Helen. The closest is Riptide. Another "Rummy" conversion of the identical hull as Helen but configured as a well deck flying bridge sport fisherman. To the right of Riptide is Rex. Another Rummy that we were told was used as a decoy boat. What we are seeing here is the end of an era of "converted make do boats" as they were replaced with custom builds designed and constructed specifically for the demands of this indistry. 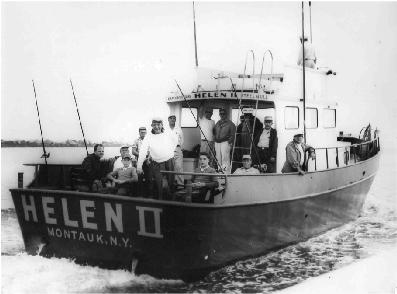 The first of a new breed. Helen II not only designed and built specifically for the work it was to perform but  she also had a steel hull. No more leaking seams, dry rotted head timbers and all the rest of the problems that are so common to wooden boats.
As one can see, the deck shelter now takes up a good portion of the main deck but there is still a below decks cabin and the head is still down there. Notice also that the boat is rigged with fighting chairs and outriggers. She was designed to serve two trades. She was continuing in the Open Boat Tuna Trolling trade that Capt. George developed and was also running weekends to Cox's Ledge. Her speed compared to that of other boats that were running there was such that she basically cut the running time in half. Watch the pictures as demands of the business create changes. 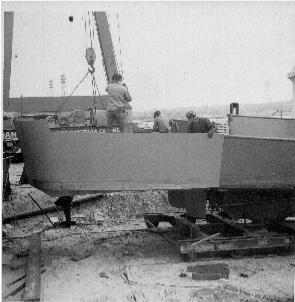 It soon became apparent that the Tuna Trade was falling apart and the Cox's Ledge  Cod trade was where the bucks were. While the boat was still the fastest in the fleet her short (50 foot) length caused her to "Squat". To make her go faster with the same power plant as well as to give passengers more rail space, the boat was lengthened 10 feet making her a 60 footer. Picture at right shows the beginning of the process of adding the section to the stern. Note that the propellers and rudders were left where they were. As a result, the boat could manouver in tight quarters like nothing else in her class. 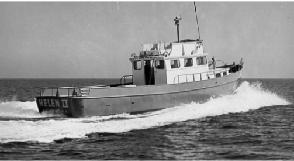 These pictures are of the boat just after her lengthning. She's long and sleek, riding flat and fast. Almost half the boat was cockpit, depending on your point of view, either  a great thing or a horrible curse. The people mostly loved it except for the fact that their feet were always wet. The mates hated it because to get to the fore deck one had to go up two steps. At the end of the fishing day you were pretty well worn out.
Shortly after the 10 foot addition was finished a third engine was added making her triple screw. She became know as "The Cox's Ledge Express".

Even thought that boat could go like a scared rabbit and was a delight to fish from, she did not show well at the dock and changes had to be made. A wheel house was put up on the top of the deck house and a canopy was extended over the cockpit. She was given a little raised focsl look on the fwd bulwarks to make her look bigger fwd. While the change worked for the reasons above and it did make it easier to run the boat without having to do it surrounded by passengers, the sleek flow of line was pretty much gone.
In 1968 things would change. 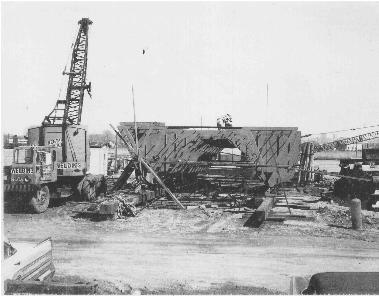 65 foot Hel-Cat (Helen Catamaran) being framed by Twin Hull Boat Company in Little Ferry, NJ. Launched in June of 1968 she was the first steel catamaran party boat in the business. After she was launched we used Helen II to tow the completed hull home and complete the boat there at the dock. 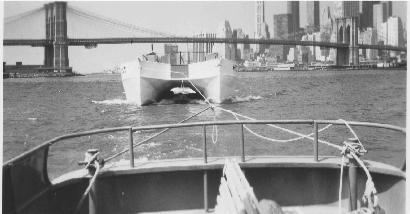 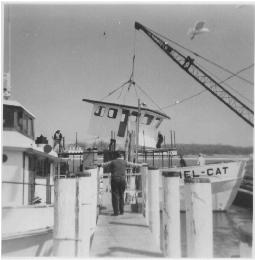 Hoisting the wheel house aboard and into place. Wheel house was constructed in our back yard while the hulls were being built in NJ. 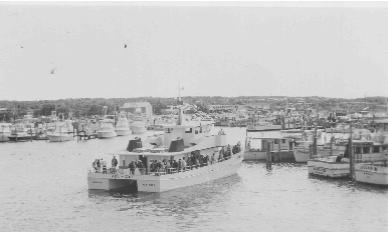 1968 picture of Hel-Cat rounding up to go into her slip in Montauk shortly after she was completed. Notice the white hull. The idea passed after a couple of years and we went back to the tried and true  bright red.
Notice the size of the deck house. It covers most of the boat. Heads are on the main deck on the aft end of the deck house. Everything is on one deck level. Top deck at this point is not for passengers. That changed down the road a bit. 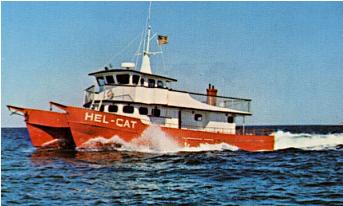 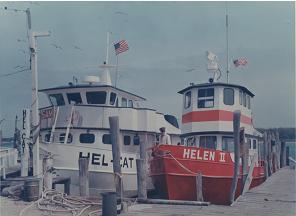 As always, things change and this picture shows the final metomorphus of Helen II. We raised the cockpit up to make her a flush deck boat and added onto the deckhouse.
One might ask, "Where does all this lead?" It leads to ALL THE IDEAS THAT CREATED HEL-CAT II.

Left to right: "Laying of the keel" work begins by assemblying the flange to the first section of the keelson. The compeleted 40' section of the fin shaped box keel. One of the web frames being turned over for welding on the opposite side. Stiffners being welded to port side of wheel house.

Left to right:  Construction of the stack  is almost done. The stack not only houses the muflers for both main engines and generators but is also a massive ventelator for the engine room. A 3' fan will be installed into the square opening in the back of the stack to pull hot air out of the engine room while pulling fresh air in. Notice the structurly completed wheel house in background. Web frames being hoisted onto flat bed semi to transport them to vessel assembly site. All of these pictures were taken on the family Horse Farm where sub assemblies and scantlings were fabricated.ASSEMBLY BEGINS at a leased shipyard in Jamestown, RI.  The 40' fin shaped keel is set up on the blocks of the ways. "Tonnage Bulkheads" (specially made frames that reduce the countable internal space of a vessel to reduce "Gross registered tonnage") are being attached to the keel.

Framing continues moving forward. Web frames, watertight bulkheads and intermediate frames can be seen. The shape of the hull is also becoming apparent even to an untrained eye.  Framing continues toward the bow. Notice the steep deadrise of the hull fwd. that will allow her to split head seas with little effort and uncommon comfort for a vessel in her class. Hull plating well underway. Hull plating done, bow sprit in place, last section of fwd bulwarks not yet closed.

Left to right: Main deck is plated and welded. Bulwarks are under construction. Hull construction is complete, has been sand blasted and primed and is ready for the barrier coats and final finish coat. Hull painted and deck house under construction. Launching day, notice Hel-Cat standing by in background to tow Hel-Cat II off ways and to a dock in preperation for tow to Groton where she will be completed.

"On the Hip" Hel-Cat does duty as a tug first moving her big sister to a dock, then to Groton. Second picture shows Hel-Cat bringing Hel-Cat II into Groton for the first time. Super structuire complete, Hel-Cat is again pressed into tug service to move new vessel toThames Shipyard, New London (last picture) so the superstructure could be blasted and painted. Note that the mast was blasted and painted before installation because of the intricacy of the structure. 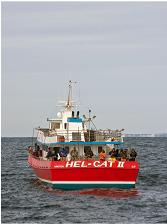 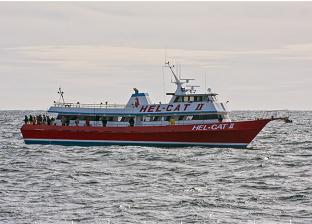